Representatives from NJ DEP (Dept of Environmental Protection), Army Corps of Engineers (ACOE) and Stockton University gathered to talk about the state of our Jersey Shore beaches. Poor attendance, but staging the event allowed for the pro-dune, PR machine to rev up. Gotta debunk all that residential anger, ya know.

Margate, Ventnor and Longport beaches better than ever?

Stockton’s Stu Farrell: you can either hike over the tall dune….or don’t.

Army Corp of Engineers [ACOE] talked about local ‘partnerships’. Cooperation between Fed, State and local leadership. We didn’t see much of that.

In Ventnor, Commisioner Lance Landgraf is forced to always defend the State’s wishes. He has to. Landgraf’s full time job is at the state run CRDA, Casino Reinvestment Development Authority.

In Margate, commissioners say they have no real seat at the table. They’ve been neutered. Compelled to sign away Margate’s beaches to insiders from Trenton. Cashing in, while serving up payback. Brutal, financial revenge on Margate. From the same man who brought you the George Washington Bridge scandal. 50 years of sand pumping.

Stuff like this is why the ‘Margate Homeowners Association’ and ‘Friends Of The Margate Boardwalk’ were formed. Groups like these aim for more transparency. A higher standard of accountability from community leaders.

‘Beach replenishment and dune building. Just a way for politicians to spend all that Hurricane Sandy Relief money’ said a 26 year, Margate resident. ‘Protect lives and property? Yeah right. Push around sand for the next 50 years and cash-in.’

48-inch sewer pipes dumping into the Margate surf. What are we draining? The Colorado River? Geez. 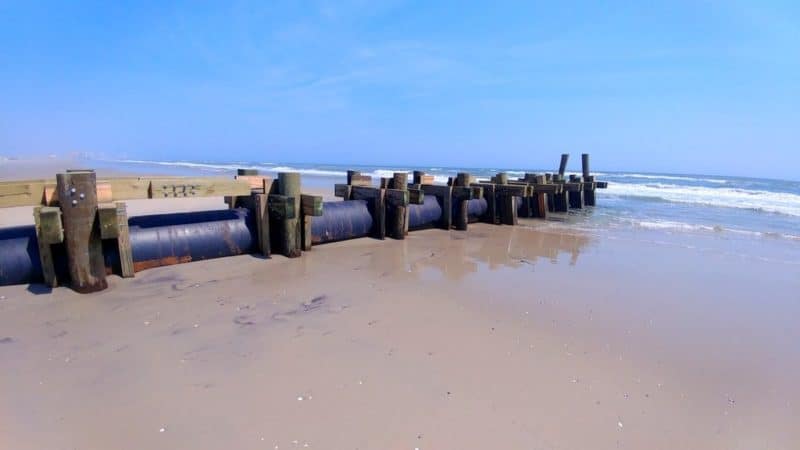 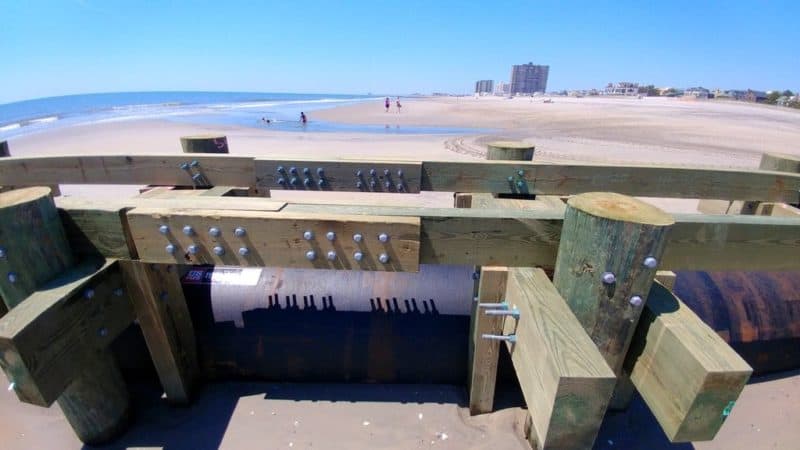 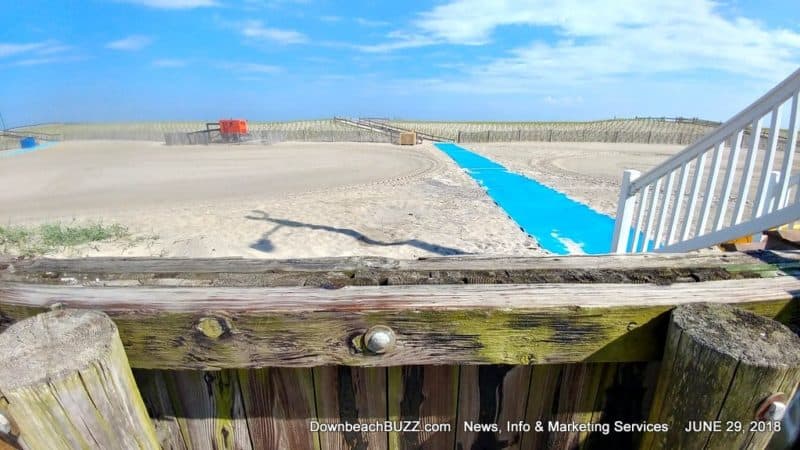 Getting paid per cubic yard of sand pumped. Strip-mining of surf bottom.

Um…. where are those ‘Sustainable Downbeach’ peeps? Not interested in environmental chaos? Sound of crickets from local green teams. #SustainableFail.

Over-sized, expensive tools and tactics. Big stuff had to be used. That’s how they got the big money. Oh… and they’ll try to protect against a rare, 100 year storm too. That’s what the Army Corp and DEP say.

Beaches are unrecognizable, difficult to access and unsightly. Read report from Amy Rosenberg and Philly.com

The occasional drainage issue was easily taken care of via ‘trenching’. Creation of temporary drainage paths to the ocean. Trenching was not only cheaper, it was more environmentally sound. It was approved by NJ State for decades.

That’s why a growing group of Margate residents want to rebuild their boardwalk. This would solve the ADA access problem. A boardwalk would once again allow Margations to enjoy waterviews.

Jewish Exponent: The dunes have stretched out beachgoers’ commutes, forcing visitors to walk up and down the structure to reach the sand. It’s been derided as a possible deterrent for disabled people and seniors. According to the Census Bureau, 38.4 percent of Margate’s population is aged 65 years and older. “I don’t go to the beach as much because it’s a whole big production,” Maxine Garfinkle said.

Margate Mayor Michael Becker said beach tag sales are down 2 percent from last summer. He labeled the downtick an “insignificant” number and insisted many residents’ outlook on the beach situation has improved. “People have been on the beach since Memorial Day. The majority of them are coming away with satisfactory comments.”

Ventnor Dunes To Be Widened Naturally

In Ventnor, the State of NJ took over another chunk of beach. Twenty feet on the water side of the dune. Just north of the Ventnor Fishing Pier, thru Jackson Ave. Portions of Ventnor beach will be cordoned off in a project they hope will widen the dune over time.

During the recent Commissioner meeting, Landgraf squirmed as he shared news of how NJ DEP was going to enlarge (widen) the dune system even more. By at least 20 feet.

Other towns will wait. But Landgraf said Ventnor should ‘get ahead of the issue’, embrace the NJ DEP action. No beach raking will occur within this space. No sitting or walking either.

Keith Watson of the Army Corps of Engineers says outfall sewer pipes [that funnel contaminated street water directly into the surf] are common in Jersey.

Rosenblatt admitted that chronic back bay flooding did most of the Hurricane Sandy damage.

The Army Corps will try to force dunes on Mayor Ernie Troiano in Wildwood. Whether he needs it or not. Just watch. Wildwood gonna fight back. Ernie is a Mayor with cahones.

It’s a 15 freekin’ minute walk to reach the surf in Wildwood. Crazy.

The newly formed, Margate Homeowners Association is also ramping up. Both orgs are chiming in on these types of issues.