The Margate Boardwalk Committee keeps moving that ball down the field. And now, we find out that Lucy is gonna help.

CEO of the Save Lucy Committee, Rich Helfant, says the world famous elephant will do whatever she can to support the rebuilding of Margate’s beloved Boardwalk. Yup. Lucy the Elephant is officially on board. Helfant says rebuilding Margate’s boardwalk will not only benefit Lucy, but the entire town as well. We agree. 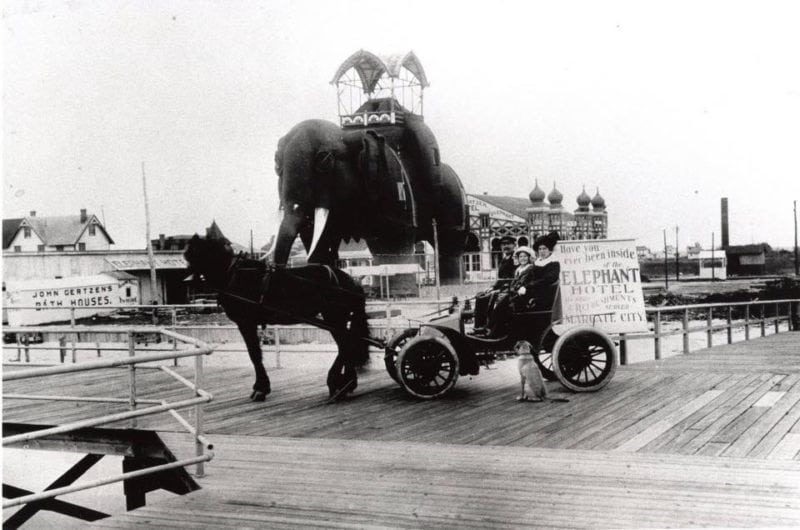 Lost in the storm of 1944, Margations decided not to rebuild it’s wooden way. Ventnor quickly rebuilt their Boardwalk, stopping at the Margate border of Fredericksburg Ave. Almost 75 years later, talk of rebuilding the Margate Boardwalk has returned with a passion.

A Margate boardwalk would create a sense of community in a town that has spent most of it’s time building homes on every square inch of land. Margate residents and visitors LOVE boardwalks. Too bad they have to drive to Ventnor to use one. From Press of AC: Mixed-use recreational paths are an asset to communities everywhere, but there may be no better and rewarding place to walk, run and bike than with a view of surf and sand. While many Margate residents and visitors enjoy neighboring Ventnor’s Boardwalk and its protection from auto traffic, they have to cross streets that are often dangerously busy to get to it.

Friends of the Margate Boardwalk want to keep most of the Boardwalk away from the bulkheads. Instead, they prefer a quasi-straight line. Directly behind and above the new, artificial dunes.

The route would only come near the bulkheads in three spots.

90% of the Margate boardwalk would be out on the beach, away from the bulkhead.

What about privacy? Pro-boardwalkers say: “there’s never been privacy for beachfront homeowners. All beaches and beachfront streets are public. Beachgoers already use these sidewalks just a few feet from the beachfront homes.” Beachfront homeowners were never guaranteed beachfront privacy. No beach block street parking is another sore spot for many,but that’s a whole different story for another day.

Margate Boardwalk committee’s Glenn Klotz says: ‘these (anti-boardwalk) folks constitute 1% or less of the homes in Margate. They exist along a public park, with public access in front. People walk directly past them daily, on the sidewalks, going to and from the beach.’ Diana Borek Papadelis  > It is my opinion that a Margate Boardwalk will help increase property values. I know (beach sewer pipe) construction resumes after Labor Day. But getting over the dunes is such a problem that I can’t see how those blue (mobi) mats are going to help. Access is a very real issue. Lack of easy beach access, will bring down the property values.

Once permitting is complete, costs will be discussed. Grants will offset some of the costs. We might even see a wealthy ‘angel’ or two stepping up to provide financial assistance. Maybe fund a pavilion. Maybe have their names on it. Maybe buy a boardwalk bench for your folks?

Funding for re-building the Margate Boardwalk could come from a variety of sources.

Glenn Klotz says rebuilding a Margate Boardwalk will increase property values. ‘Margate with a modern boardwalk is a must, not just an option like some want you to believe. Does city hall believe using 4-wheelers to transport people over the dune is a long term solution?’

Consider this: If Margate votes to rebuild a Boardwalk, the DEP / Army Corp of Engineers are NOT likely to say no. As we all know, the ACOE is always looking for stuff to build, so says Margate Commissioner, John Amodeo.

A boardwalk with ramps from the street ends solve many of the access issues that plague those with walking issues. A boardwalk would provide better beach security too. Police can put bike and vehicle patrols on the boardwalk. Lives will be saved by improving access for EMT’s and ambulances.

It’s true. Margate residents are seriously considering the benefits of rebuilding their Boardwalk. Having a boardwalk (like Ventnor) will come in handy when storm water run-off, gets trapped behind the dunes. Because of their boardwalk, Ventnor doesn’t need outfall sewer pipes. (except for Jackson Ave.)

LUCY CEO Helfant says the ACOE, Army Corps of Engineers, created a dead zone by building a dune, right down the middle of the beach. It hurt foot traffic to Lucy. Rebuilding the boardwalk will fix that problem.

Lucy would certainly benefit from rebuilding the Margate Boardwalk. It would make it easier for Atlantic City, Ventnor & Margate visitors to visit this National Historic Landmark called Lucy.

Public safety is also addressed by a Boardwalk. Let’s get those bike riders off of dangerous Atlantic Ave. In Ventnor, Atlantic Ave is even worse at 35 mph!

Lucy wants her boardwalk back. So do we.