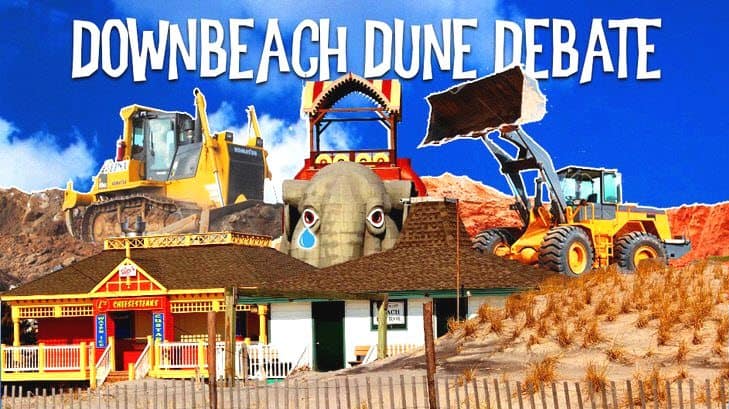 The Margate Dune Project: Separating Myth from Reality. From http://www.mcqbp.org/…

Myth: Dunes in Margate would offer substantial added protection in the event of a major storm or hurricane, such as Superstorm Sandy.

Reality: The vast majority of the damage in Margate from Superstorm Sandy was inflicted upon homes and businesses on the bay, not the beach block. Margate’s bulkheads will not wash away in a major storm…dunes will. Many of the Jersey Shore communities to the north, which suffered extensive damage, do not have bulkheads.

Myth: The “dunes project” would be at no cost to Margate taxpayers.

Reality: No one knows the real costs to taxpayers associated with the project long term. If replenishment is required every three years, as recommended, the cost to taxpayers could be as high as $15 million over 50 years.

Myth: The federal government knows what’s best for Margate citizens when it comes to protecting their property.

Reality: Even the most ardent supporters of dunes wouldn’t claim that dunes offer any protection at all to any residents other than beach block property owners. Most beach block owners have indicated that they don’t want dunes. So why would Margate citizens want to be on the hook for potentially millions of dollars to provide minimal protection to homeowners who neither want nor need it?

Myth: Margate’s beachgoers would not suffer any ill effects from man-made dunes.

Reality: The dunes would substantially reduce the useable beach area at high tide, and create potentially unsafe and unsanitary conditions from pooling of dirty water behind the dunes. It would also hinder access to the beach, particularly for the elderly and families with small children.

Bottom Line: The project isn’t “free.” It doesn’t provide substantial protection. And it will limit access and greatly diminish the natural aesthetic beauty of Margate’s beaches.