Offshore New Jersey wind farms: are we jumping into it with limited research?

Senator Brown: What is cost to taxpayers? Project could force a rate increase. Listen below to clips from SHEP ON FISHING Podcast 1400am WOND 3.30.19

Research says YES it will increase the cost to NJ electricity rate payers.

Solyndra was the much-hyped solar panel startup that raised over a billion dollars from private investors and lost $500 million of tax-payer funds, in the form of a loan backed by the DOE, when the company later went bankrupt.

Meghan Lamb is a fisheries liaison with experience in the Rhode Island wind farm project. Research shows that some fisheries avoid the electro-magnetic energy and under-sea cables of wind turbines.

Fishing & hunting is NJ’s #2 industry. Why are we messing with it? Jobs are at stake. NJ is chasing people OUT of the state. Robin Scott: ‘We’re being sold a bill of goods’

NJ Senator Chris Brown: you should continue education. Maybe Congressman Jeff Van Drew can help slow this down process down.

Big concern for fishermen: how little is known about how offshore wind farm construction and operation will affect fish populations.

The NJ saltwater industry provides 16,000 jobs. Wind turbines can and will negatively impact this work force. No guarantees from wind companies that fishing will not be affected near the ocean-based towers.

Senator Brown: you must apply pressure on those who make the decisions.

Robin Scott gets herself in trouble often when fighting for fishing. ‘We need more public fishing access.’ ‘Succumbing to foreign interest too soon?’

Wind farms, like the massive one they plan off the Jersey coast, are untested. 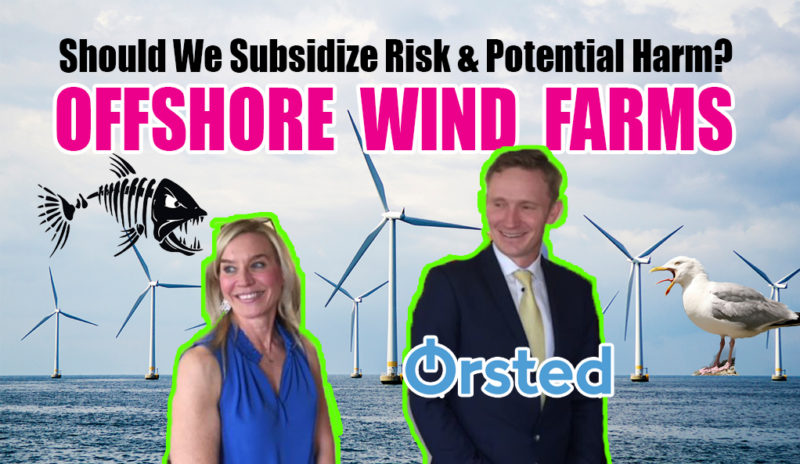 Shep on Fishing: ‘Walking on the Boardwalk and seeing 500 windmills out there.’

From CS Monitor: This flurry of activity has sparked agitation among the fishermen who have long been a fixture on the Eastern seaboard. Could fields of turbines disrupt their operations and the resource on which their livelihoods depend? Meetings with developers and permitting officials have been tense and, at times, explosive. A group of fishermen have even sued the federal government for leasing a tract of seafloor south of Long Island to an offshore wind developer. Read more > Can offshore wind and commercial fishing coexist?

Robin Scott: 500 windmills being crammed down our throat. Tax abatement subsidized by New Jersey residents. Crews being trained right now, in how to build a wind farm forest of the coast of New Jersey.

Year ago, NJ Gov. Christie said NO to offshore wind farms. Saw no value to NJ.

NJ taxpayers and rate-payers will foot the wind energy bill.

Green energy efforts like the pending offshore wind farms sound good, but the risk is high, benefits are few. New Jersey taxpayers and electricity rate payers will foot the bill.

NJ Gov and BPU said off-shore wind farms are too expensive. The ROI (return on investment ) is just not there.

Brown: people have a self-interest. You have to vet it. Fishermen need to be better represented.

Applauded by many governments around the world as one of the cleanest initiatives for the generation of energy, the wind industry is also one of the most expensive and heavily subsidized, compared with other power generation alternatives. Ryan M. Yonk, Research Fellow at the Independent Institute, presents interesting and little-known facts, which demystify wind power’s efficiency, cost, and benefits for the environment. https://www.youtube.com/watch?v=WC8z9GTQOYA